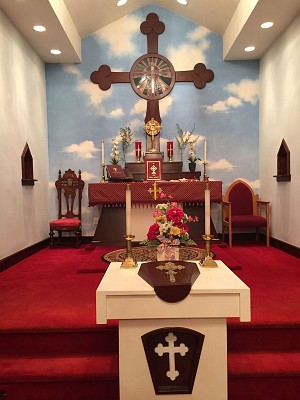 Sunday Services include Matins (Morning Prayers) at 9:15am followed by Divine Liturgy (Raza d'Qurbana Qaddisha) at 10:00am.

Assyrian Language Classes are offered every Friday from 7:30 to 9:30pm. A monthly bible study is conducted; please contact the parish for more information regarding meeting times and locations.

He was born on 1 July 1974 to Louy and Maryam Delo, a family from Nerwa, Northern Iraq. He married Layla Youkhana in 1999 and has two sons, Norsheen, and Norael and one daughter Orshena. After studying at the Baghdad Seminary of the Church of the East from 1988 to 1999, he received his Bachelor Degree in Theology (STB) from the Pontificia Università Urbaniana in 1999, granted through the Babel College for Philosophy and Theology in Baghdad, Iraq. From 2000 until 2012, Fr Oshia served as principle of the Baghdad Seminary of the Church of the East, as well as priest of Mar Odisho Church, Baghdad, Iraq (2002-2012). In 2013, he emigrated to the United States, where he was appointed parish priest of Mar Narsai parish by His Grace Mar Awa on 20 August, 2013.

Fr Oshia was ordained a reader in 1991, and a subdeacon and deacon in 1992, and on 15 September 2000 he was ordained a priest by His Holiness Mar Gewargis III (Sliwa), who was then the Metropolitan of Iraq.